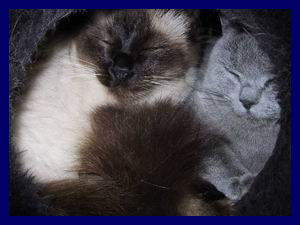 Welcome to our site!

On March 28, 2002 we officially registered our cattery. Obviously it all started much earlier than that. For those who will enjoy it, here is our story. For some of you, parts of it will be very recognizable. For those who want to skip the history can move directly to the section Cattery.

We are Erik and Leonoor and live with our cats in Winterswijk in a region called “de Achterhoek” in the eastern part of The Netherlands. Leonoor grew up in a family which always had cats. Erik used to have a dog as domestic animal when he was young. When we started off our relationship initially we were only the two of us. But at a certain moment, after we already had discussed it several times, Erik had to have his leg laid in plaster, stuck in our home. It was Erik’s his birthday the 25th of October, and on his wish-list for presents he had……. a kitten! Before he could change his mind Leonoor rushed to the “animal asylum” as we call it in Dutch to and found a lovely small “lost and found” kitten, 5 to 6 weeks old. She was totally white with a small black spot on her nose and a small black tail…. We called her therefore “Watje”, small wad of cotton wool in English. Because she had been dumped so young, she had to be carefully raised. She always remained a small “small autumn cat” as we say in Dutch and sadly died too young. Erik in the mean time however became “cat minded”.
During “Watje” short live we obtained already our second cat “Poema” and after “Watje” died we obtained Poema’s sister “Cheetah” from a local farm nearby. Two kittens are nicer as one isn’t it? After a year we thought it would be very nice to have a set of kittens. We made a second successful visit to the “animal asylum” with the outcome: our black “Panter” with only a few small white hairs on his chest. He became a very special, lovely and highly intelligent cat. Unfortunately he began to “spray” his manhood around very early and became as a result “je-weet-wel-kater” freely translated as “you-know-what-I-mean-cat”: so no set of kittens.
After 11 pleasant, joyful years with the five of us, it all changed in September 2000. Cheetah was overrun by a car and 4 months later Panter became ill and sadly died because of that within two weeks. Poema lost over a very short period of time her two cat companions and during daytime she became the only one at the house. As a result she became depressed and miaowed all day behind the window. But in January stray cats are not delivering kittens…… we always liked the true-bred cat, a “British Shorthair” so we found it a perfect excuse now to find one. We succeeded and selected “Grizzly”. As she only was 4 weeks old we (and Poema of course) had to wait for a long time before she would come to our house. We also liked the “Sacred Birman” cat for its appearances but also its character. After again a short search we found in the south of The Netherlands our “Sherpa” she was already 12 weeks of age which meant that she arrived at our home only a week after we found her. Initially they were a bit reserved towards each other but Poema’s miaowing stopped and she lost her depression from the moment Sherpa entered the house. True friendship flourished soon after that. Several weeks later Grizzly arrived from the Northern part of The Netherlands. The two kittens had no problem at all with each others local dialects from where the came from, something humans normally have! Already the next day they were true “soul mates”. Together, like flashes of lightning the steps up and down was their favourite pastime.
We discovered that it was a lot of fun to know more about cats, shows, breeding, and everything else around heredity and so on. So we decided to register as Sacred Birman and British Shorthair breeder. We kept Amber from Grizzlys first litter in June 2002.
In 2004 we searched for and found, our last 2 Birmans, one is from Sweden and the other from Danmark.
For now our cattery will not grow much more, because we think (at this moment) 6 cats for us is maximum.

We had to neuter Lucky in September 2006, because the invection of her uterus won't heal even after the second set of antibiotics. Health is most important for us, but it is a pity that we never had a litter of Lucky, however.
Poema dies in February 2007 after a good and healthy life. She was 16 years old.
In March 2007 Lotte has her first litter. And maybe we will keep a female choc in our cattery.... Evita.
Afterall we think 6 cats is a maximum for us.